Even in Love NI Meat month it’s not just about the meat but how and where it’s cooked that gets the gastric juices going. With the tagline of ‘You book it, I cook it’ Pauline McGurk has those bases covered as well as many others with her Dot’s Kart mobile barbecue. The unique food service business hit the road last year with Pauline’s 30 years of catering experience driving the new venture. Since then she has moved through the gears having created her very own niche and is busy targeting and catering for the growing corporate and private markets. From builders to bishops and birthday parties, she attracts a wide clientele and, with the added advantage of mobility, is taking her services across the country.

“Everybody loves a barbecue but they hate doing them”, says Pauline who not only provides the food but all cutlery and crockery as well. “With Dot’s Kart all the client needs is somewhere for people to sit, I bring the food, the plates, the side dishes and look after all the rest. For example, I recently did a BBQ for 200 people on a building site where there was nothing but a hut for making tea. I’m booked to do a garden party for the Archbishop of Armagh, Eamon Martin so the range is wide and varied and I’m keeping very busy.”

Along with the staple BBQ offering of steaks, sausages and burgers, Pauline also customises menus on request, providing the bespoke service crucial to business success today. Coupled with her use of purely local produce, she is cooking up the perfect recipe being highlighted by the Northern Ireland Year of Food and Drink.

“All my food is prepared fresh, from the coleslaw to the sauces, all of which I prepare myself. I buy the vegetables locally and use the local butcher in Magherafelt, Diamond Meats. I’ve also started serving buffalo which, believe it or not, I’m sourcing locally.”

The buffalo is indeed being reared on Ballyriff Farm in Magherafelt and led to one particularly unique booking earlier in the summer.

“I put on a purely buffalo BBQ with buffalo burgers, steaks and sausages for neighbours of the farm who were watching the herd being reared and wanted to sample it for themselves. I’ve also done a lot of work with the eel fishery in Toome and serve up street eel and eel suppers at a range of events across the area.”

Those events have included the Irish Game Fair and Fine Food Festival and the revitalised Toome Fair, one of the oldest horse fairs in Ireland. At such gatherings the growing phenomenon of food and drink as a crucial part of the visitor experience is very much apparent.

“The Year of Food and Drink has definitely raised the profile, people are not only paying more attention but more people are getting involved,” said Pauline. “It’s become even more important now to have a reputation for good, fresh, local food and I make everything I can make as far as salads and sauces go. I don’t use pre-packed coleslaw or salads and source all I can locally.”

Pauline’s commitment to fresh, local ingredients has been a long-standing value and over a decade ago the then school catering manager implemented ‘Jamie Oliver style’ school dinners. Long before the celebrity chef made his high-profile documentary Pauline was improving the quality and nutritional value of school dinners locally, to the extent that her ground-breaking work was officially recognised. In 2006 she was awarded a Janus Award for Management Professionalism in Large Scale Catering, becoming the only woman to win the award and beating off such competition as Campbell Catering and Malmaison and Radisson hotels. 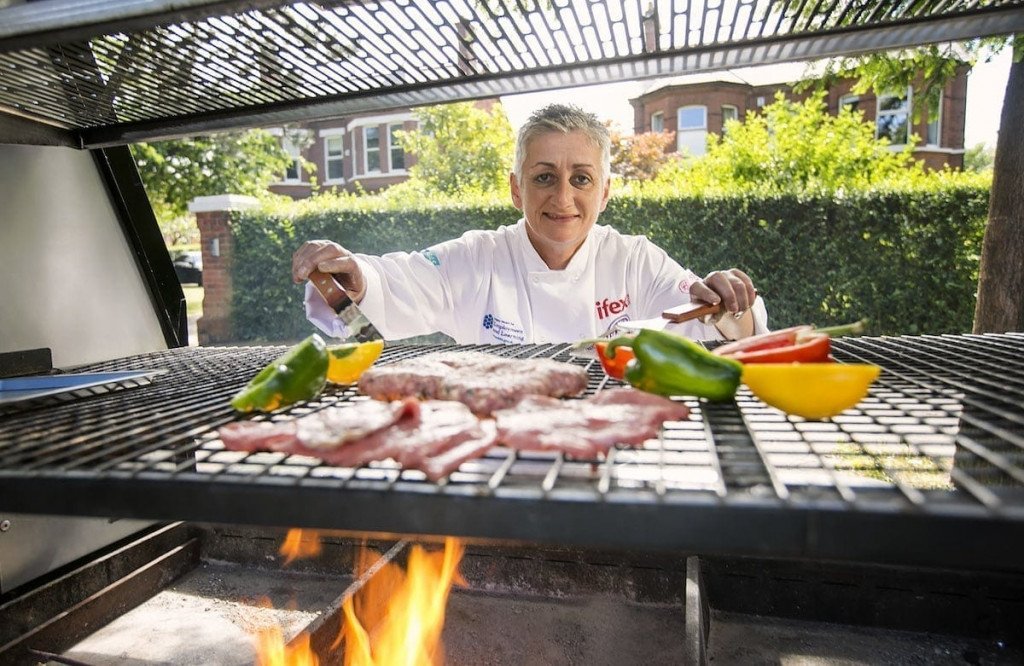 She is continuing to break the mould with this latest venture as a street food trader whose main business is private – and the word is spreading.

“Although I do the odd event where I sell directly to the public I found that market can be swamped so that influenced my decision to target the corporate and private markets,” she explains. “I do everything from pre and post wedding parties to hen and stag parties and the most recent interest has been from schools. Principals are seeking catering for staff development days, sports days and special events so that is continuing to grow and I’m currently doing between four and five barbecues a week.

“I recently filmed a piece with UTV Ireland with Bobby Kerr from RTÉ’s Dragons Den called Along Home Shores. That took place on the shores of Lough Neagh in Ballyronan for a piece which will be broadcast in September. I also took part in a shoot for Irish TV in May for the programme Tyrone Matters where I tied in with Lowe Brothers master butchers in Stewartstown.”

Such collaborations are crucial for continued business expansion, says Pauline, who plans to do further work with the buffalo farm. The Tyrone woman, who lives in Magherafelt, is also keen to see food tourism grow in the Mid Ulster area and with facilities continually improving sees this as a real possibility.

“There’s a real opportunity for food trails around the lough given the fishing traditions with eel, pollen and the like. With the Seamus Heaney centre opening and other Heaney related events more people will be coming into the area and we have more than enough to cater for them. Like everything else it’s a case of getting ourselves organised and getting the support to do that.”